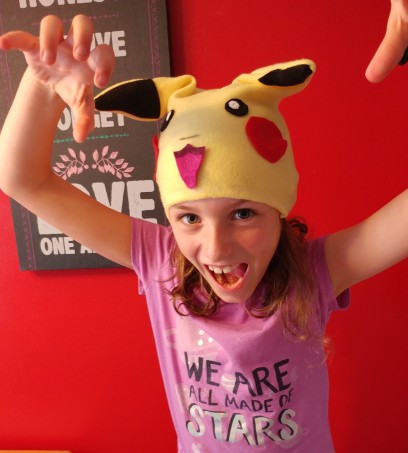 I think I may be one of the only people I know under the age of 35 that never got into Pokemon, whether as a child or more recently with Pokemon Go. However, my husband loves Pokemon, which means in turn my nine-year-old daughter, Lilly, also loves Pokemon.

While it isn’t my jam (I’m more of an Earthbound and Zelda kind of girl), I wanted to encourage her fandom and find a project for us to do together. I’ve made a couple new sew character hats in the past and thought it would be a fun, easy weeknight craft. This is a simple and pretty quick craft, but drying time makes it a two day project, and it could certainly be broken down into more chunks to do over a few night to give kiddos something to look forward to after finishing homework, chores, veggies, or whatever they need incentive to do without giving you hell. It also could be an easy Halloween costume paired with a yellow sweatshirt and sweatpants — comfortable, warm, cheap, and no face paint involved. Of course, if you really just want to make it for yourself, by all means.

I had some yellow fleece lying around from a project a few years ago as well as some red felt. I used the idea as an excuse to go to JoAnn’s for black and pink felt, fabric glue, and a white puffy pen. Of course, I know I already had fabric glue and possible a puff pen somewhere in my craft stash but a 10 minute search did not recover them so I went the lazy route. I’m pretty sure I buy new fabric glue every time I do a no-sew project because I am terrible at keeping track of it. But I had coupons, so I also got myself snap fastener pliers and rose gold wire. (which I also had but “misplaced”)

This would be easy to do with most kids 6 and up with help as needed from you. See the tutorial below for a step-by-step. 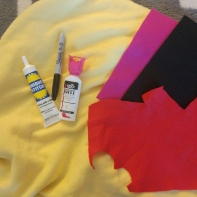 First, fold your fabric in half and trace the shape of your hat. If you intend on making multiple hats trace onto something to use over and over as a stencil as opposed to straight onto the fabric — such as poster board or cardboard — and then use your stencil to trace your hat onto your fleece. I flipped one of my daughter’s hats inside out so I wouldn’t accidentally get any marker on it. Lilly’s hat came out a little tight; if I were to do this over again I would have either measured her head (which is really the correct way to do it) and added an inch & half for seam allowance, or I would’ve traced about three quarters of an inch outside of the hat instead of right around it.

After you have the body of the hat, draw some ears. Make them a little wider than you think they need to be and don’t worry about them being perfect or symmetrical, you won’t notice the difference when it’s all said and done and neither will your kid. Cut both layers of fabric along your line, including the ears as one solid piece. Fleece tends to cling together so I didn’t pin along my markings first, but by all means, pin it first if you’d like. You should have two mostly identical pieces at this point. 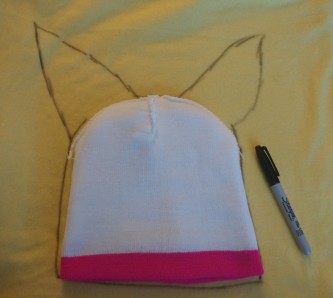 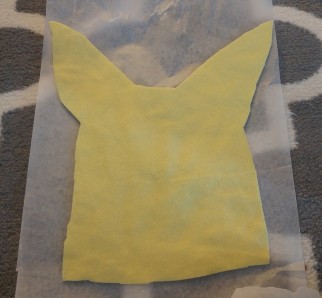 Next, you want to cut your face shapes. I used a roll of electrical tape as my stencil — I traced the inside of the roll for the eyes and the outside for the red cheeks. Draw a mouth (look at pictures of Pikachu for reference) on hot pink. Place your hat on a protective surface: I use dollar store wax paper. Arrange your shapes and when you’re happy with them, glue them down with your fabric glue. Make sure nothing is too close to the edge of your fabric to allow for a seam. 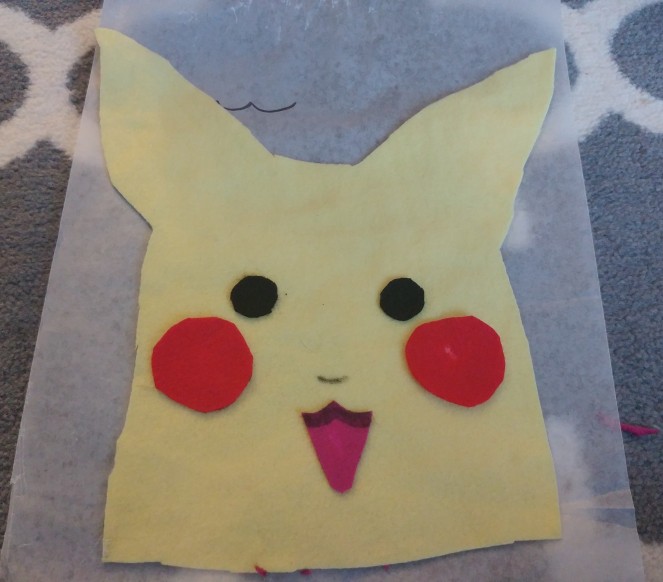 Draw a nose with Sharpie with a small curved line or dot and shade the top of the mouth. In retrospect, I wish I had used a dot, but hey, I wasn’t going to start over. Add highlights to the eyes with your puff pen — instead of trying to draw perfect circles and fill them in, squeeze a little out, stop squeezing, and use the tip of the puff pen to gently push the paint around into a wider, prettier circle.

Once you have the face in place, roughly trace out the outer third of the ears on black felt, cut, and glue. Allow everything to dry, at least a few hours or overnight. (this is a good stopping point to send your kid to bed) 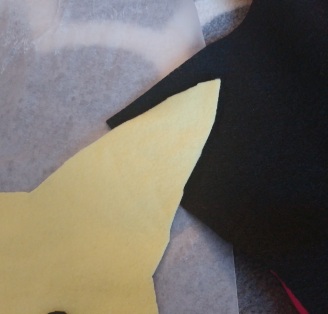 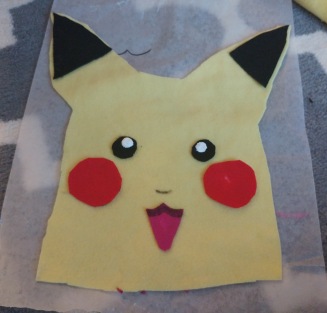 Now we’re going to hem off the bottom of the hat. You can leave it as is, if you’d like, as the fleece won’t really fray, but hemming it will give it a more finished look. Start by folding the bottom of your hat under as much as you want to hem it. Once you have a look you like with at least a quarter inch to half inch of fabric folded underneath, finger press it down to create a crease and flip your hat face down. Draw a line of glue and press down your hem firmly a few times. I did not use quite enough on the first go and had to go back over it, so use a semi-generous amount. Turn it face up to dry, the gravity will help keep everything in place as the hem dries. 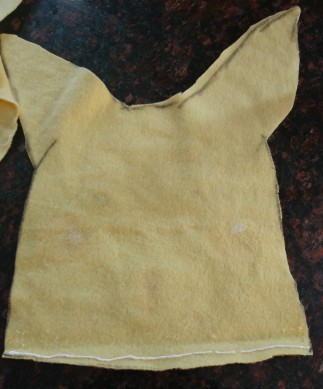 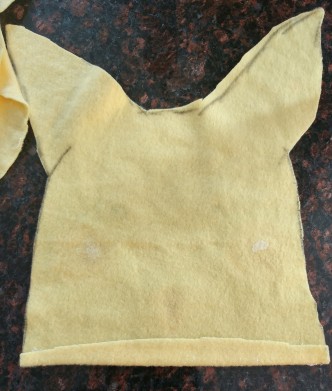 To hem off your back piece, first lay your back piece on your face up front so that theyears are mismatched, as in not paired up with their symmetrical side. This is to assure everything lines up when we finish the hat. This time instead of folding under, fold your hem upwards until it lines up to be the same as your hat front and crease the fabric. Remove from your hat front in order to prevent getting any excess glue on it and glue down your hem. 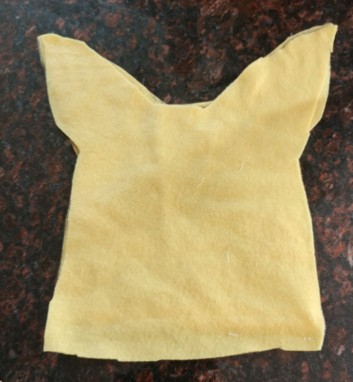 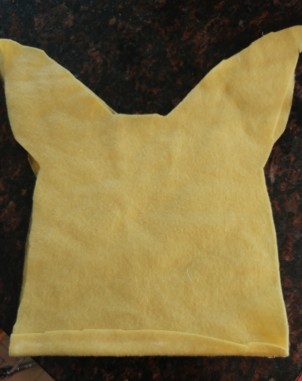 After everything is dry you can either go totally no sew and glue your seams or bring it to your machine and sew it. I did opt to sew it just because it easier and faster, and frankly I tend to be kind of sloppy so it was less of a thing. I used my quarter inch foot, but you can go bigger if you’d like, it just happened to be on my machine at the time. If you want to sew, pin and sew right sides together, ears matched up appropriately, and backstitch at each end. If you decide to glue, apply glue about a quarter inch to a half inch from the edge on the FRONT of your Pikachu face, then put the back on top, making sure the correct ears line up if not symmetrical. 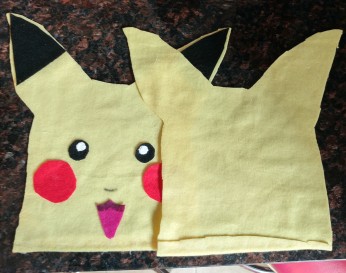 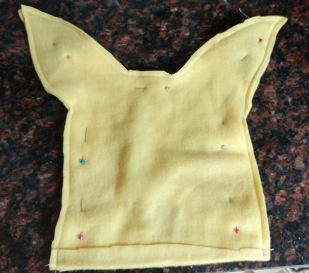 Allow to dry overnight before turning right side out. Snip the corners from the ears to get rid of excess bulk and get a better point. A chopstick or pencil is great for pushing out the corners. 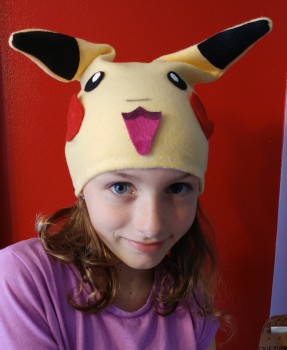 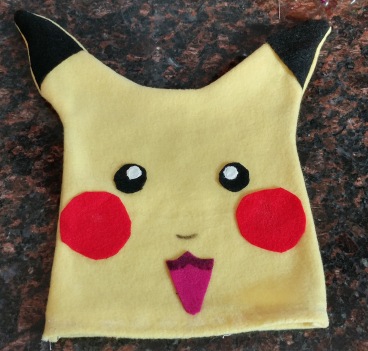 One thought on “DIY No Sew Pikachu Hat”