On July 31st, 2016, at 8:10 AM, I became a mother for the second time. Nothing went the way I had hoped, or planned, but when I heard Astra cry for the first time, I knew everything would be okay.

Thirteen weeks prior, when I had my 20 week anatomy ultrasound at work and was being scanned by one of my close friends, I didn’t suspect anything was wrong. When she told me the radiologist had to come in and talk to me, I thought it was because of a normal anatomic variant in the heart that is of no concern in the absence of any other abnormalities, was harmless. My 12 week scan and blood work had been normal. But when the doctor scanned me, too, and the second radiologist on duty came in to see as well, and I was told I had a cyst on my placenta, I didn’t know what to think. And when my friend, and ultrasound tech of over half decade, told me she had never seen it before, I worried.

I headed where any frantic person goes for answers — the internet. I tried to avoid message boards and things like WebMD, looking for case studies and medical journals. I found one study with less than 30 cases over a 20 year period. Words like “ominous” and “growth restriction” jumped out at me, but only in cysts over 4cm or with multiple cysts. But I decided not to worry until I spoke to my OB and the pediatric radiologist at my work.

Fast forward to a couple weeks later and my OB hasn’t seen a placental surface cyst either. She wants to follow up at a high risk antenatal center with a specialist 6 weeks later. And that’s where everything got scarier.

My first scan was normal, the cyst measured right at 4cm — the maternal fetal medicine specialist said usually things were fine, and not to worry, but she wanted me back in 2-3 weeks. I relaxed. Everything would be okay. My second scan was not as assuring — my baby was diagnosed with IUGR (intrauterine growth restriction) and had an elevated umbilical doppler, which meant my placenta was working against my baby. I was put on bed rest and given betamethasone injections to mature my baby’s lungs for premature delivery.

For five weeks, I saw my OB once a week and had scans one to two times a week, depending on how well baby was doing the scan before. Every week I was told we could hold off until the next week to see if I needed to deliver. I researched premature babies so I would know exactly what I was in for. I couldn’t do much, although I tried to push myself to do a little work around the house or sew on occasion. I became depressed, terrified that I would lose my baby, unable to distract myself with activities I normally enjoyed or with my work and my patients. My nine year old, Lilly, was amazing. She packed her own lunches for camp, helped around the house with dishes and laundry, always asking me if I needed anything. She grew from a little girl closer to a young woman, stepping up and taking responsibility around the house, trying to help care for baby and me. Baby grew, too, but slowly, and the cyst grew faster — it more than doubled in size to over 8 cm. In the fifth week of bed rest, baby’s growth dropped substantially. She had put on a third of what she should of put on in a week in a two week period and only measured weighing 2 lb, 13 oz at 32 weeks gestation when she should’ve been about 3 and a half lbs. I went back two days later for a doppler check, and I was finally admitted to the hospital for delivery on a Thursday.

I was already told I would have a C-section as she was too compromised to deliver vaginally. I didn’t even care how I delivered. I was relieved the time was finally here. I just wanted her okay and out where I could physically see that she was okay, instead of constantly counting her movements and waiting week after week to be told she was doing too poorly for her to stay inside me. I was given another course of betamethasone and my C-section was scheduled for Sunday morning. The NICU nurse came to talk to Sean, Lilly, and I the night before, to tell us what to expect. To tell us she wouldn’t cry, that she wouldn’t be breathing — she told us that she would be hooked up to oxygen or CPAP, having a giant mask on her face; that she would have a central line inserted through her umbilical cord and we wouldn’t be able to hold her for a week, that I may not even see her for a few hours after she was born, depending on how severe her condition was.

The next morning, I woke up before sunrise to have time to shower before our family showed up. I tried so hard to pretend I wasn’t absolutely terrified. Family came in and out. They took me back first on my own, Sean could come back after I was prepped. I laughed and talked with the nurse. The epidural was incredibly painful, far worse than I remembered with Lilly, pain shooting down my left side. Sean came in and they put up a sheet to keep me from seeing myself cut open. I didn’t feel pain, but I felt massive pressure that caused my chest to feel like it was going to blow. I felt twisting and pulling. After what seemed like an eternity, they lowered the sheet and I saw flashes of pink and red, and a little head began to come up, and then I heard it — I heard her cry out.

On July 31st, 2016, at 8:10 am, I became a mother for the second time. Nothing went the way I had hoped, or planned, but when I heard Astra cry for the first time, I knew everything would be okay. Sean was able to hold her, and he brought her and set her on my shoulder, and I felt okay for the first time in a long time.

She weighed 3 lb, 5 oz, and measured 16.25 inches long. She was breathing on her own, slightly bigger than expected although still much smaller than she should be. And she was beautiful. She didn’t need oxygen, she didn’t need an umbilical line, just an IV. Her APGAR score was 9/10. It was incredible. She was tiny, but she was healthy.

Sean followed her to the NICU while they put me back together. I cannot believe people think C-Sections are easier than labor. The chest pain became unbearable and the anesthesiologist gave me morphine. The tugging, pulling, feeling of being wound up and pulled together was awful. After what seemed like hours, I was brought to recovery and Sean came to see me and told me Astra was still doing great. I was able to go hold her properly a couple hours later in the NICU. She was so small her hand didn’t even wrap halfway around my fingertip. 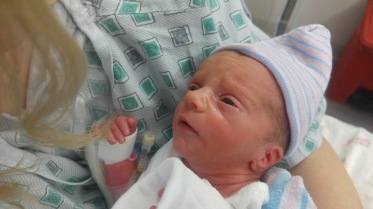 While I was still in the hospital it wasn’t too bad. My room was maybe 10 yards from the NICU and I could go see Astra whenever I wanted.I stayed positive because I knew she was doing so much better than expected. I pumped and pumped to make my milk come in, waking up every 3 hours to do so, even if I got nothing. I went down to the NICU multiple times a day, being able to hold her twice a day for about an hour at a time before she had to go back into her isolette, her little glass house.

The day before I was discharged, they had to put in a central line (PICC) because she didn’t have any good veins left for an IV and they were still doing fluids and TNP (total parental nutrition) until she could eat. Premature babies, especially babies with IUGR, have very sensitive digestive systems, and milk is very slowly introduced due to the risk of necrotizing enterocolitis.

The next day, I cried more than I had the entire ordeal. I buried my face into her blanket and cried uncontrollably. I held it when we got into the car to go home and cried, I curled up with it and cried until I fell asleep when we got home. I cried when we went back up to visit Astra in the NICU later that night, and I cried when we left. Leaving the hospital without her was one of the hardest things I’ve ever done. And the next day, when I was able to hold her again, it was one of the most comforting moments I’ve ever had. 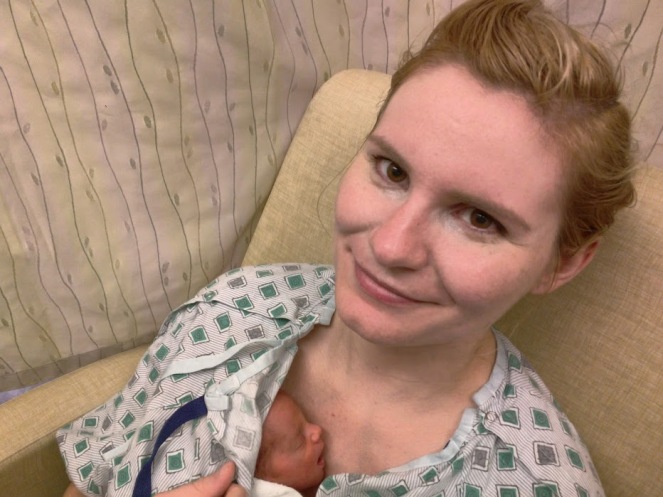 Over the next two weeks, Astra got bigger and stronger. Sean and I went up to the hospital to see her 2-3 times a day. Her PICC was out in less than a week and Lilly was able to hold her for the first time. As a trade off, they gave her a feeding tube so they could give her more milk without tiring her out from feedings.

After Sean went back to work, I still went up with Lilly two to three times a day, and then again at night with Sean. We would kangaroo her in a NüRoo shirt and I would read Harry Potter to her. Funny enough, they share the same birthday. At home Sean finished painting the nursery, and his brother Mike came and put together her furniture while we visited her. I would break the rules and go up and down the stairs more than I was supposed to in order to fold her clothes and organize her blankets and diapers. Her feeding tube came out, and one day she was in an open crib instead of her isolette, and we just waited for her to get over the 4 lb mark.

Finally, on September 19th, Astra came home. It was the biggest sign of relief I’ve had in months, and having my family together has been one of the most cherished moments in my life.

Since she’s been home I’ve been slowly finishing all the things I’ve wanted to do for her nursery. I have to be back at work in a couple weeks and finishing Astra’s room represents some sort of normalcy I wanted to have in my maternity leave. 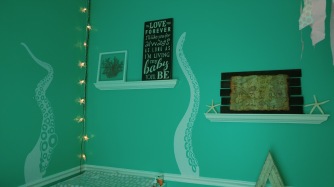 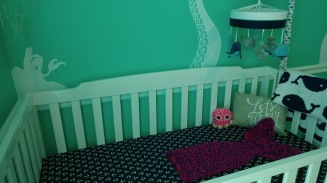 I created the tentacle and mermaid wall decals on my Silhouette with five yard rolls of Oracal 631 (found here) — applying them was more difficult than I wanted as I didn’t have the proper transfer paper, but they came out great despite that. We found the upcycled light fixture at an antique shop, Sean hung it up and we added the starfish string lights to the cord to dress it up. The jellyfish were actually decorations my sister-in-law, Meg, had made for the baby shower; she made them from paper lanterns, crepe paper, and ribbon. I made the curtain from Camelot Under the Sea Scales fabric in teal, which I also used in her quilt. You can find the fabric at Fabric.com, but it is no longer available in teal.

I still have her quilt to finish and want to make a purple ruffled crib skirt. When I first planned her nursery, I envisioned having it done before she was born, adding final touches in the nesting period during early labor. But things never turn out how we plan them, and sometimes that’s okay.